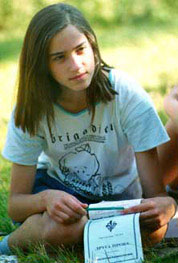 While being Cub Scouts (members from 5 to 11) or Rover Scouts(members from 12 to 18) Plast members are going through a line of different stages. Completion of every stage shows that Plast member has made one more step to his self-improvement, and now he can start completing his next stage. After finishing certain stage Plast member is given a certain degree, which is shown on Plast uniform by a degree mark.

Requirements to every stage are adapted to a certain age and require completion of certain tasks or earning some knowledge, necessary for a Plast member in his everyday Plast activity. The list of those tasks is accurately shown and formulated in the requirements of Plast “proba” - Trial.

Plast Trial is a list of things that a Plast member has to complete. During a certain time Plast member has to show in the conditions of a real life with the help of his work and efforts, things that he has been through and knowledge, that he has completely mastered the development material given to him and that he can use the knowledge and means which meet a Plast program of his age.

On the level of Cub Scouts there are three Trials:

When Cub Scout is completing his first Trial, then he is making his Plast promise and gets his Plast mark, which he wears on his beret and above his shirts left pocket.

During every week meetings, gatherings, walks and traveling of a circle (group 5-10 people) and gatherings of a whole Hut (union of usually 3-4 circles) a Plast member is getting familiar methodically and in a program way with the educational material given to him, he goes through it in his work and life and in this way he works out and develops certain parts of his character.

Technically passing the Plast Trial is being realized through a game, exercise or competitions in a group of other Plast members, who are passing the same phase of examination.
Print version