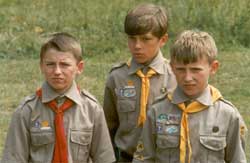 A person that starts to visit gatherings of Cub Scouts doesn’t become a Plast member right away. First 6-9 weeks he/she is a follower of Cub Scouts, not becoming member of cirlce yet, he doesn’t have a right to wear a uniform, doesn’t pay membership dues. After completing a period of getting to know his fellows the kid completes a statement of entering:

“I want to be a nice Plast Cub Scout. Please make me a member of Cub Scouts group”.

The main goal
Cub Scouts group gives kids possibility to develop their spiritual and physical powers as best as possible and according to the basics of Plast with the help of Plast methods fitted to the children age. In Cub Scouts kids are getting ready to live an active life in Plast. Cub Scouts aren’t true Plast members.

Educative cells
The smallest organizational part of Cub Scouts is Swarm (“riy”), for boys or girls, which has its own name and consists of 6-12 members. Mentor of the swarm is brother or sister - a person that has already turned 16 and has passed exam in special qualification. 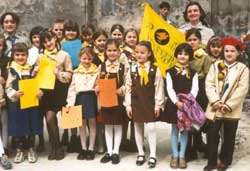 The head of swarm is a girl or a boy which has been appointed by the mentor. He is simply helping the mentor in different tasks as making gatherings, collecting membership dues, organizing different lessons during games, notifying his fellows of the meeting (gathering) time. Each swarm is choosing its own name-symbol (for example “Foxes”, “Nightingales”, “Bees”).

Two-four swarms create a nest (“hnizdo”). Inthe nest each swarm has its own number. Regional Headquarters of Plast registers, approves the name and gives a number to the nest. Nest-keeper (“hnizdovyy”) is responsible for nests work. It can be qualified brother or sister that has passed exam in special qualification.

Eachswarm has its own banner, meaning yellow flag with swarm’s symbol mark sewed on it. The flag has a form of a triangle (base-25 cm, height-30 cm). Swarm-keeper is taking care of this flag. Each swarm has to have its own totem, meaning a picture of swarm’s symbol attached to a stick.

Methods of work
Cub Scouts are getting ready to become true Plast members under guidance of their mentor. In a form of a game they are developing their character, speed of their mind, intellectual and physical abilities. 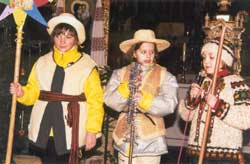 Directives and methods of educative work in Cub Scouts:

Methods: stories with suitable themes; law, promise, song, skills, good deeds, studies about Ukraine, games, life in the nature, self made games, fairytales, kids plays, craft, reading books, work for house, visiting museums - all this and other things are parts of being active member of Cub Scouts.

Members of Cub Scouts are greeting each other with their greeting - “Prepare!” (“Hotuys!”). If they are dressed in uniform then they raise their right hand up bent in their elbow, and their middle and forefinger form a “V” letter, and rest of their fingers are bent into their palm. Straightened fingers symbolize love to God and Ukraine.

Cub Scouts have their own promise:

To love God and Ukraine, to help others and to keep to Law of Cub Scouts.

The Law of Cub Scouts:

A meeting of swarm - is a matter of whole education in Cub Scouts. That is where mentor awakens love to God and to the motherland, teaches to respect elder people. Cub Scoutsare learning how to play fair, how to help others; they tie their first bounds of strong friendship, what later leads them to their youth and older ages.

Every meeting of Cub Scouts swarm has its goal and idea. Meeting’s plan is put together by mentor, according to the age, degree and skills, time of the year, religious and national celebrations or themes from Cub Scout’s everyday life.

Meetings have a system of consistency and sequence. Tasks that are given to kids are sure to be checked on time; if the promise is given - then it has to be done. Systematic and steady preparation of meetings plan is a basis of work with Cub Scouts. Cub Scouts are getting to know themselves better right away; they take part in simple games, listen to fairytales and therefore are getting ready to pass their exams for degrees and skills: they complete tasks, play special games and that is how they are preparing to become true Plast members.
Print version