Plast idea: loyalty to highly-humane and common to mankind ideals - God, Fatherland, your family, people that are close to you and all the humankind. This idea is fixed in Plast oath. Oath is a free-will and of course public, solemn statement, by which someone promises absolutely and unchangeably to do something, to live or by any means try to keep to accurately determined conditions, and also not to do anything bad, not looking on the problems and dangers they will have to deal with.

I swear with my loyalty that I will do everything in my powers, to:

This oath contains all of the promises, gathered in three main points - Three main duties of Plast member, which as three road marks, have to stand in the memory of Plast members and to lighten their way in everyday life.

Only after completing Plast oath a member of Plast has a right of wearing Plast emblem - a three-leaved lily on his uniform and to put fingers on his right arm into the Plast greeting - “SKOB”. 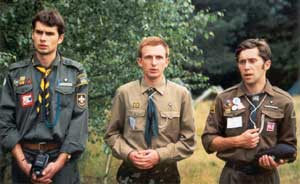 1. Loyalty to God demands from us not only the belief in God, but also living a nice morally correct personal life. Loyalty to God Plast members show through things that they do, by behaving in accordance to moral rules and by showing love to people that surround them. They feel their duty to care about others, no matter if it is their family, school or Plast circle; they respect everything created by God: recognize human’s dignity, care about wealth of other creatures, care about nature. They develop the felling of beautifulness and keep to esthetical norms in their behaviour, language and look. Plast members never humiliate people.

Each Plast member respects God in accordance to their denomination and at the same moment respects the right of others to have their own denomination.

To be loyal to Ukraine means to realise yourself as a part of Ukrainian community, its patriot.

Loyalty to Ukraine is symbolised in Plast emblem, where Scouting’s Fleur-de-lis - flower of the lily - is inseparably interlaced with Ukrainian Trident (“Tryzub”). Ukraine - whole Ukrainian community settled on its forefathers lands and abroad; this, especially culture, language, church and other material and spiritual gaining, gathered throughout centuries of existence of Ukrainian culture. For youth this means that they:

2. Duty to help others showsPlast members treatment to his surrounding, to people and to nature. This means not only completing his social commitment, but also to do good things out of his own initiative. Doing good things has to be a good example of Plast members’ humane character, his individual abilities and therefore it should bring pleasure. Plast duty calls not only to love people near to you, but also to help them. Plast member has to be a useful member of the society in which he lives. Practical usage of this Plast duty is in the idea of doing good things every day, which is symbolically reflected on Plast “vidznaka’s” (vidznaka - decorations). It not necessary has to be a big deal, but it has to come out of own will of Plast member, so it can be of some use to someone or something - human, animal or plant, and so Plast member put something in: time, effort or some subject.

The duty to obey Plast leadership shows how important Plast finds the community discipline. By completing Plast oath by his own will, a person recognizes the power of law, which rules in community. Playing Plast game, we get used to keeping to the law and listening to the leader, to playing by rules. And this recognition a person will carry through life, through their native country.