Essay out of Plast History

Plast rose up out of the feeling of a need of an organization for youth to serve Ukrainian nation. Taking the scouts organization as a base, founder of Plast - doctor Oleksandr Tysovskyy has developed a unique education system which still being somewhat close to scouting had it’s own number of peculiarities which made it differ from other scouting organisations in the world.

Principles of Plast life made out by Oleksandr Tysovskyy found their reflection in a book called “Life in Plast” a book which has been used by Plast members for more then 70 years.

A word that has replaced word “Scouting” has become a word “Plast”. The word “Plast” comes from a name for Cossacks-scouts, who were called “Plastuny”.

In 1911 students of Peter Franko and Ivan Chmola established first Plast circles. Official beginning of Plast has been the day of a first given oath in the First Academic Gymnasium in Lviv - 12.04.1912 by the first circle. This circle has been founded by Oleksandr Tysovskyy.

In 1913 there has been a first gathering of the representatives of Plast circles in Lviv, on which “Organisational Plast committee” has been created. In this year the first travelling camp has been organised.

In 1914 the war has suddenly started and many Plast members had become members of USS.

After the fall of Ukrainian nation Plast renews its activity at first in western Ukraine and then among Ukrainian youth that are emigrants in different countries of Western Europe. In Plast gathers Ukrainian youth that studies at school, is from towns and is working somewhere. A series of Plast publications starts to come out, among them official organ in Plast “Young life”. A book by Oleksandr Tysovskyy “Life in Plast” comes out.

Andrei Sheptytskyy - Ukrainian head of a church had also joined the process of rebuilding Plast by giving a territory in Ukrainian Carpathians - a mountain called “Sokil” to Plast members.

In 1928 the legal Plast activity has been forbidden on Volyn and in 1930 in Halytchuna (cultural and historical regions in Ukraine). 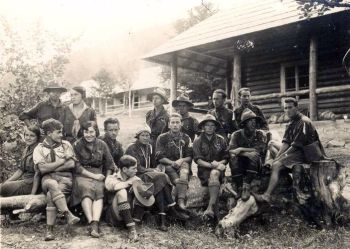 During this period Plast in Halytchuna works illegally under command of a secret Plast centre. Work is made through Commission of Educative Houses, “Ridna shkola” (a name of a magazine “Native School”) and publication of a magazine “Vogni” (“Fires”).

Polish government punishes all Plast activities by arresting people and sending them out to concentration camps.

In 1939 starts World War II and Plast is trying to renew its activity in Ukraine. However German occupational authority didn’t let Plast organization to live and Plast members had to continue their activity illegally.

After the last war a great number of Ukrainians were left behind the borders of Ukraine. Plast circle were being organized in many places by the Main Plast Leaders and Council in Munich. Plast is active in countries of Northern and Southern America, Australia, England, Austria, France and etc.

Since 1950 Ukrainian Plast has developed its activity on new places of living such as Argentina, Australia, Canada, Great Britain, Germany and USA. Plast activities, lectures, educative and special camps are being organized. Following magazines are being published: “Vogon Orlynoy Rady” (“A Fire of Eagles Council”), “V dorogy z Rover Scoutsm” (“Into a road with youth”) - for vuhovnyks, and for Cub Scouts every month comes out “Hotuys” (“Be prepared”), for Rover Scouts “Yunak” (“A young man”) and for older Plast members - “Plastovyy shlyah” (“The Plast way”).

6th period: rebirth of Plast in the independent Ukraine (since 1990)

At the end of the 80’s the political situation in Soviet Union has changed: the government made the control over words and abroad contacts a bit lighter. New organizations that helped Ukrainian national rebirth have been created.

Thanks to the work of certain people and support of some new organizations new Plast circles had been created in different societies and environments. Already in 1990 they have been created in Lutsk, Kyiv, Donetsk, but the widest web of Plast was created in Lviv region and among other cities - in Lviv, where City Council on February 22 1990 has solidified the regulations about Plast organization.
Print version