The main goal of Plast

The goal of Plast - is to promote an all-round, patriotic education and self-education of Ukrainian youth on Christian principles; based on Plast ideological principles, to educate youth as conscious, responsible and valuable citizens of local, national and world community, the leaders of community. 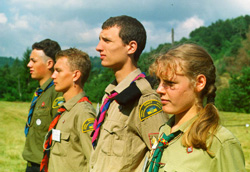 To reach this goal, Plast develops moral, spiritual, social and physical abilities of its members; cherishes between the youth the idea of their ancestors traditions and passing on and comprehending their history, culture and national traditions.

Self-education…
Self-education - is a process of continuous self-development. Girls and boys that are Plast members are completely responsible for their all-round development and elaboration of their character. This term includes free-will oath of keeping to Plast duties. Working in a group is an integral part of self-education and includes ability of working together, organising activities, and taking care of each other. In this process youth is helped by mentors, who are taking places of mentors and putting the work of youth into the useful direction.

All round…
All round - is an all-round development: physical, intellectual, social, emotional and spiritual. Big accent is made on developing leadership skills and abilities. Plast helps to develop a personality of a full value that can work useful by itself or within a group. The members of Plast are putting before them high requirements in completing Plast ideals and in development of their skills. They are always working on improvement of their character, trying as best as they can to get deeper knowledge. They put before themselves requirements, which are always encouraging them to develop further, to work more on themselves. Everyone measures his success not only within the level of other people, but also within his own, competing with himself, in order to get closer to the top level of his abilities or natural skills( to his potential).

Patriotic…
Plast members are trying to grow and become with each time better not only because of their own success and happiness, but also for the good of community, nation, and state. The Ukrainian Plast members are cherishing love to Ukrainian community and are ready to work for its good. Plast develops useful citizens, who are accurately completing their community obligations, teaches them how to take initiative in improving the community and how to become leaders in society and country.

Free-will - is the most important basis of success. Free-will entrance to Plast, free-will Plast oath, free-will obligation to keep to the Plast Law - this can make a young person to work on himself, to try to become better, to become a true Plast member. Young person, an elder person then takes over personal responsibility for his self-development, attitude, behaviour, gaining knowledge and skills, for his health, etc.

How is Plast main goal reached?
Through life in Plast. Not through being a member of it, not through listening to the basics of Plast world-view or studying technical abilities in Plast. But through life according to Plast world-view, practising it in everyday life, at home and on gatherings, at church and at school, during work and during studies, during a game and during a play.

The basis of Plast work, the basis of life in it is a game. A game, which youth plays in its group under the control of leaders, according to accurately described rules. A Game, but not a toy-game, which has elements of life in an organized society. A game in Plast - is first of all a game reflecting community organisation with an idea of elaborating desire to create communities among youth, to teach them the forms and methods of working in a group, to inoculate among youth group working discipline, activity and will to devote themselves to the good of society.